As the demand for SVOD continues to arise and there’s more uproar and dissatisfaction over intellectual property rights and under paid actors, film makers, and a whole range of movie related roles, Vabble was introduced as the cutting edge disruption needed in the space that leveraged the blockchain to both provide a superior product and at the same time act as an additional mechanism to give more intellectual and physical control to the creators of a movie or piece of media. Vabble decided to transcend the idea of allowing the audience to pay for the content they want; instead, the audience becomes an engaged participant in the transaction process.

Vabble, which breaks down an intense amount of information on its site Vabble.com is innovating new and creative ways to provide a better experience for the end-user. Accompanied by the content, the experience can dramatically change the way we see SVOD services. Vabble also bridges the gap between the community and SVOD by creating a digital cinema on the user’s device.

The company first launched its beta test last 2015, which generated 5,000 users and over 300 native users. As the next beta launch nears this 2021, Vabble looks to introduce more innovative features to the platform.

Vabble created VAB, the digital currency in the Vabble platform. This token serves as the primary transaction currency when purchasing the services in Vabble. Each user receives a wallet where they can store all their tokens when using Vabble. After paying the monthly subscription fee, the wallet slowly decreases until the user will need to buy more VAB again.

Users also receive rewards through VAB from rebates and cashbacks throughout the transaction. Users may also use these tokens to vote for their favorite movies, film producers, actors, and actresses.

Without a middleman, the cash the producers receive is significantly higher compared to other streaming sites. These producers may still receive more from different exclusive privileges that the users would want to avail of. 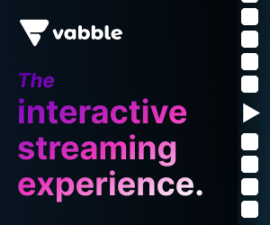 The entire Vabble platform serves as a self-functioning economy between the users and the content creators. Thus, this economy only accepts VAB as the currency in the platform. Thus, Vabble also carefully monitors the release of these tokens to prevent any hyperinflation in the future.

The production Launchpad is a tool for filmmakers to find funding from potential investors. More precisely, this platform looks to help film makers find funding for producing Vabble exclusive content. This platform is also an exceptional way to ensure creative freedom and censorship resistance when producing content.

Vabble also introduced the co-watching feature in the platform. The user can create a private room with a link they can distribute to their friends. The chat and screens share functions appear when the friend enters the call.

After which, the party can enjoy the movie together and order takeout from their favorite restaurant. After the friend enters the lobby, the room creator can go through Vabble’s extensive collection to find a movie to watch.

Vabble is already attracting more excitement for the scheduled beta test this quarter. You might want to start pre-registering to enjoy the different features when Vabble releases the platform to the public. With multiple IDO’s available and an ICO scheduled for July, Vabble is posed to create a significant ripple within the film industry and community as it presents a fresh innovative take on many of the problems within both the film industry itself and externally in the satisfaction of the end audience.